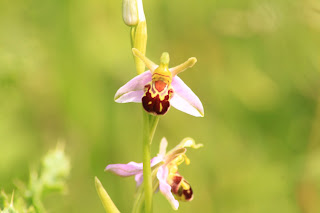 The life cycle depends on so many variables it is very difficult to predict where they will bloom from year to year. If the fungi does not occur in the soil the seed cannot germinate because they spend their early life in a symbiotic relationship with each other.
In , Bee orchids are at the northern edge of their range. It is too cold for the species of bee that pollinates them in southern . They get round this problem by self-pollinating.
However the bee orchid is declining. Orchids, of many different kinds, have declined right across . In the past, orchids have been picked for their attractive flowers. In the case of the bee orchid the single flower is the culmination of up to 8 years growth and, if picked, the plant is unlikely to flower again and has lost its only chance of producing seeds.
Bee orchids can also vary in size and structure within different colonies due to the reproductive behaviour with slight changes or mutations within the genes of the parent plants been passed on though asexual reproduction. 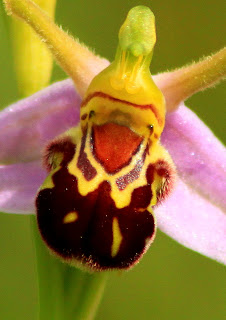 Posted by Dave from Durham at 16:53 No comments:


Lilly with her cubs inside her den, same black bear as Gordan Buchanan's documentry film, big thanks to Bev/aspenbreeze on flickr for posting this link, and amazing photographer.

till next time
Posted by Dave from Durham at 18:44 No comments:

With the other half meeting up with her sister took the offer of being dropped off down the fell, I know how lazy is that, decided to get dropped off on the lane where I had a mooch up the south burn, the best  I saw was a goldie treecreeper, gs woodpecker and some redwing approx 5, pretty quite really heron lifted off the wannister bog area. Zig zagged across the reclaimed open cast area  and a wee jump for joy my first skylark of the year singing his little heart out. 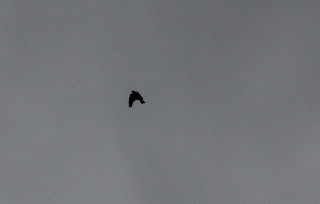 Carried on up the farm track network towards home where a further 30 redwing, small group of long tailed tits, 2x bullfinches were sighted and approx 100 woodies, nice little mooch out

till the next time
Posted by Dave from Durham at 16:17 1 comment: 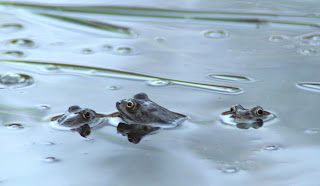 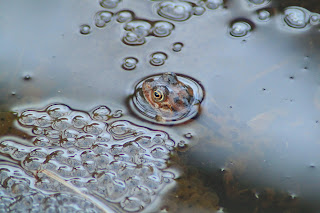 till next time
Posted by Dave from Durham at 22:11 No comments:

been out the last two nights around the place, tawnies calling (x3) different locations which I'm absolutely chuffed about their back, pretty sure heard last night the woodcock pipping.
The frogs in the pond are certainly active and absolutey a joy to watch through the night vision lens real action going on, try and take the DSLR down tomorrow see if I can get the image but these guys and gals were frantic tonight. (the only reason i have a night vision lens is that I have borrowed it from work where we use it to align communication lasers, so thanks to me bosses)

Me wood is starting to come alive.

Report of another woodcock sighting around by Holmside

till next time
Posted by Dave from Durham at 21:49 No comments:

Horrible day low cloud and a dank day, however decided to abandon my support for the English rugby team (new they would win)and try and utilise the weather window that was opening up. Went straight to the monastry area of seggar woods and was quiet pleasently surprised to find life, a roe deer disappearing into the thickets and wasn't to be seen again, at least they are still about, had some guns in the woods lately.
In and around the twisted ash approx 20 redwing and a couple of mistle thrushes mixed in with them, it's amazing how big the thrushes are to the redwing. Unfortunately no sign of the nuthatches but did see 4 x GS woodpeckers Parus family chaffies and bullfinches were also present. My best surprise was that I nearly stepped on a woodcock, that got me heart racing frigthened the living day lights out of me, however that was encouraging the previous week I came across the same bird (only summising here) but couldn't ID it, flew and disappeared too fast. Next weekend has to be better. 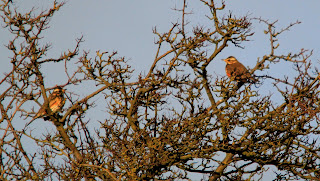 redwings near the old monastry

Here we go again, Friday afternoon the wood was dead had to take a picture of a birch polypore, 1 x GS woodpecker sighted flying over, even the Parus family weren't about, think they were all emptying the garden feeding stations 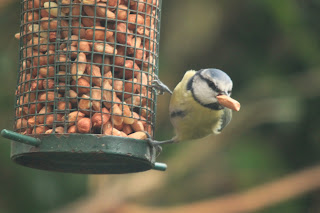 Saturday woke up to snow, took the dogs out and had a walk through the woods not even an itch, abandoned any hope.

Sunday got to get some phot's, thanks to Steve E. blog mentioning Brasside ponds decided to have a dodge down they , been a while since last visit, Goldeneye, wigeon BH gulls, black backed & herring gulls cormanants coots moorhens tufties mallards and mute swans present. Walked into a patch were some tree thinning had taken place and noticed the owl box as I got closer saw movement to the front of the box, was it to be!

No the box had a squatter in it and by the looks of it the owls may have to send some heavies around to shift them, yep grey squirrels present. 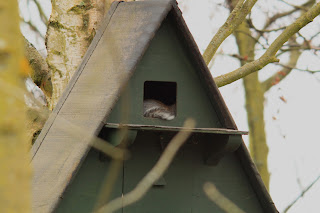 Primarily that has been my fortnight, whatever happened to cold crisp Feb. days even night time photography has been pants, anyway onwards and upwards and we will see whats around the next corner

till the next
Posted by Dave from Durham at 19:40 No comments:

Decided to have a mooch around on Saturday (5th Feb)on my local patch, wasn't optimisic about seeing a great deal with the battering winds that had prevailed the previous 24hrs. The walk started off quitely with only seeing members of the Parus family on the reclaimed pit heap,kicked around to Joe's pond still no sign of the Moorhens(bred and raised three last year)but not really a surprise with everything flattened by the snow. Trailed through the woods again the Parus family being the only spot, hung around some woodpecker knocking posts but no sign, getting worried about these guys usually are drumming by now or have done for the past nine years.

Well seen nowt, suppose I'll have to kick up onto the Charlaws

AH, better success by the old monastry the list grew, a charm of Goldfinch, Bullfinch x 5, Redwing x 3, Mistle thrush and a pair of Nuthatch, got a glimpse of my female GS Woodpecker which I spotted about 2 weeks ago, come on lass find your man.
After leaving the Monastry area  I kicked into the old clay pits, forgot how wet and boggy this place is, yeap on my backside and sliding, however some good signs of plantlife were emerging, might be a regular plant spot in a couple of months.  Kicked on again, around the Charlaws, saw a couple of Jays, Crows and BH Gulls no sign of any Curlews or Buzzards.
Re entered Sacriston woods when a lovely Treecreeper came into view, same place as i was watching it last summer can only summise it's the same bird, chuffed with that.

And thats my Monastry Mooch 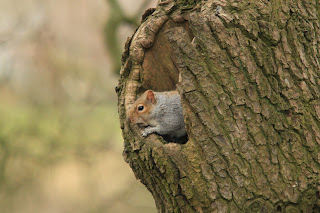 four greys seen in Sacriston woods, this one taking time out 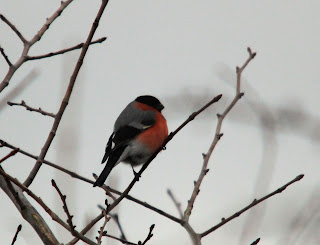 Bullfinch near the Monastry
Wed 2nd Feb, saw my first toad in the open
Posted by Dave from Durham at 19:28 2 comments: